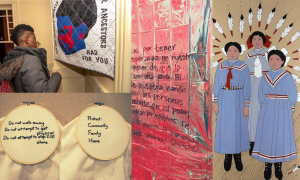 *Please RSVP to receive instructions on joining the virtual workshop.
Join four artists from Lewis Latimer House Museum’s special exhibition Home/Land, for a live discussion and Q&A, moderated by curator Katheryn Fuller.
Home/Land looks at the influence of the Fugitive Slave Act on Lewis Latimer’s family and the tactics used to detain, deport, and re-enslave with current practices used by Immigration Customs Enforcement to control the influx of immigrants, refugees, and asylum seekers.
The exhibition pairs true stories of those who escaped or attempted to escape slavery in the years surrounding the Fugitive Slave Act of 1850 with current experiences of families attempting to migrate to the United States with the hope of finding a home in the land of the free.
Artist Bios:
Ann Lewis is a multidisciplinary activist artist using painting, installation, and participatory performance to explore themes related to American identity, power structures, and justice. Her work interrogates power imbalances such as mass incarceration, police brutality, and the desecration of women’s and trans rights. Ann’s data-driven art uses concept-specific materials to reflect facts in these apocryphal times. She has shown at the Obama White House, and her mural See Her received an Americans for the Arts 2018 Public Art Network (PAN) Year in Review Award. Ann’s art has been acquired by the New York Historical Society Museum and the US Library of Congress. Her work has been reviewed in Hyperallergic, Artnet, Interview Magazine, The LA Times, and The Guardian. She has exhibited in solo and group shows throughout the US and abroad including shows at Petzel Gallery in New York, Seyhoun Gallery in Tehran, Iran, and Truth to Power during the 2016 Democratic National Convention in Philadelphia.
As an educator and artist, Sejin Park is invested in social justice and participating in community based actions that lead to sustainable equity. She is currently the Education Coordinator at The Noguchi Museum, where she coordinates and teaches school, family, adult, and community programs and leads the Teen Advisory Board, a year-long paid internship for New York City high school students. Prior to The Noguchi Museum, Sejin obtained a BFA in Studio Art at New York University, and worked and interned at various museums, non- and for-profit art institutions, and public schools.
Sheridan MacKnight is a painter and jeweler based in Los Angeles, California and Santa Fe, New Mexico. * She is Hunkpapa Lakota from the Standing Rock Reservation and White Earth Chippewa from Minnesota. She earned a BFA from Pasadena, California’s Art Center College of Design. She has received many awards at the Santa Fe Indian Market, and has participated in shows at the Heard Museum, MoCNA, Hood Museum, San Diego Museum of Art, and Pablita Velarde Museum of Indian Women in the Arts.
Sylvia Hernandez was born on the Lower East Side of Manhattan and raised in Williamsburg, Brooklyn. Her love affair with art dates back to middle school, when she discovered a talent for drawing and painting. She then attended the High School of Art & Design. Today as a celebrated and self-taught master quilter, she is able to pinpoint how illustration brought her to her current fascination with fabric and sewing machines. Sylvia creates timeless, handcrafted works that address community and human right issues. She has exhibited locally, nationally and internationally as part of a number of high-profile art exhibitions including the Brooklyn All Stars Quilt Show, the Made in New York Quilt Show, Pennsylvania National Quilt Extravaganza, the Fiber Arts Fiesta Quilt Show in New Mexico, and the Journey of Hope in America: Quilts Inspired by President Barack Obama which traveled as far as Japan. Sylvia is currently the President of the Quilters of Color Network of NYC and Co President of the Brooklyn Quilters Guild. She is a member of various professional associations including the Women of Color Network, Cadre Community Artist group from El Puente. She teaches at El Puente Academy of Peace and Justice, MS 50 and has worked with AgitArte, a social justice group that has led community educational and art programs in marginalized communities in Puerto Rico and locally. She works out of her home studio in Brooklyn, where she currently resides with her husband Miguel.

This program is supported, in part, by public funds from the New York City Department of Cultural Affairs in partnership with the City Council, and by the Shelley & Donald Rubin Foundation.