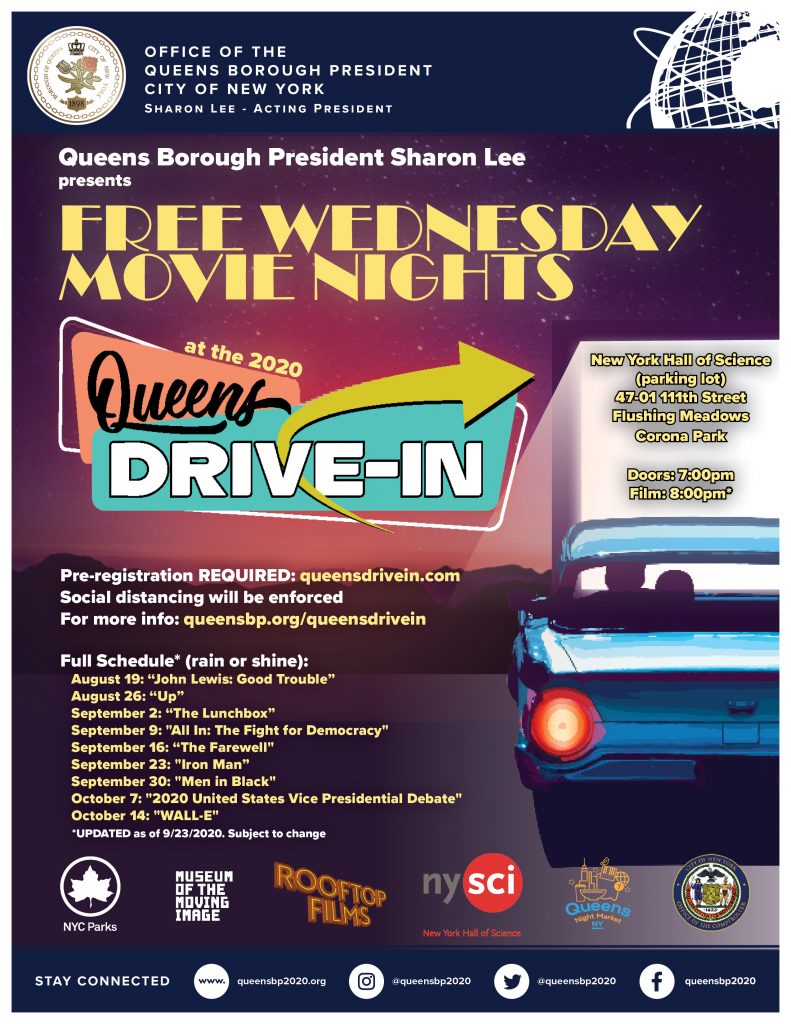 Vice President Mike Pence and U.S. Senator Kamala Harris will participate in the only Vice Presidential debate of the 2020 election cycle on October 7 in Salt Lake City, Utah, which will be screened live and for free at the Queens Drive-In. Prior to the debate, Rooftop Films and The Meteor will present a pre-debate program highlighting the voices of filmmakers whose documentaries speak directly to our political moment and the issues at stake in the 2020 campaign: Healthcare, voting rights, climate change, gun control, the Supreme Court and more. Come early, please be sure you are registered to vote and Let Your Voice Be Heard.

With less than three months before November’s presidential election, “All In: The Fight for Democracy” explores the history of voter suppression, the barriers to voting that still exists today and rising wave of activism to ensure all voters have equal, unobstructed access to the ballot box.

A comedic and heartfelt narrative starring Queens native Awkwafina as Billi Wang, “The Farewell” dives deep into the importance of family by exploring just how far Billi and her relatives are willing to go to protect and celebrate a cherished loved one.

Directed by famed filmmaker and Queens native Jon Favreau, “Iron Man” follows the eponymous Marvel superhero, played by Robert Downey, Jr. a genius defense contractor and creator of an ultrapowerful suit of armor who must use his newfound abilities to unravel an insidious plot against him.

Released last month, this Dawn Porter-directed documentary chronicles the life and legacy of The Honorable John Lewis, one of the most prominent leaders of the Civil Rights Movement and later a longtime member of Congress representing Georgia’s 5th District until his death on July 17. The film explores Lewis’ upbringing and storied career through rare footage and interviews with Lewis, his family, political leaders and other prominent figures.

Nimrat Kaur stars as Ila, a married woman who accidentally strikes up a friendship through Mumbai’s famous lunchbox delivery system with a retiring widower, portrayed by Irrfan Khan, in this critically acclaimed 2013 Hindi romance film written and directed by Ritesh Batra.

Will Smith and Tommy Lee Jones star as Agent J and Agent K, members of the secretive “Men in Black” government agency tasked with helping police extraterrestrials on Earth. Their mission to save the galaxy culminates at one of Queens’ most iconic settings, which itself hides a shocking secret.

A Best Picture nominee at the 2010 Academy Awards, this animated adventure follows elderly widower Carl Fredricksen as he sets off for South America by tying thousands of balloons to his home. But with a young Wilderness Explorer named Russell on board as an accidental stowaway, heartwarming hilarity ensues.

This beloved animated film explores pressing themes like environmentalism and climate change through the eyes of WALL-E, a solitary trash-compacting robot roaming a post-apocalyptic Earth devoid of human life. But with the discovery of a single plant comes hope for the future of this barren garbage-strewn wasteland.

SOCIAL DISTANCING WILL BE ENFORCED

A Queens native’s box office blockbuster, classic kids flicks and the timely tale of a civil rights icon are just some of the films to be enjoyed by Queens families this socially distant summer at Acting Borough President Sharon Lee’s “Free Wednesday Movie Nights at the 2020 Queens Drive-In” — a series of seven free, drive-in film screenings on the grounds of the New York Hall of Science (NYSCI) in Flushing Meadows Corona Park.

Part of a larger, comprehensive, multi-borough drive-in film festival, the series of free screenings in Queens will run for nine consecutive Wednesdays, beginning August 19 with a screening of “John Lewis: Good Trouble,” a newly-released documentary chronicling the life of The Honorable John Lewis, the civil rights champion and longtime member of Congress who passed away last month.

The free movie nights in Queens are presented in proud partnership with NYC Parks, the New York City Comptroller, Rooftop Films, the New York Hall of Science, the Museum of the Moving Image, and the Queens Night Market.

The slate of “Free Wednesday Movie Nights at the 2020 Queens Drive-In” includes an eclectic mix of smash hits, new releases, popular children’s movies and fantastical favorites for all Queens families to enjoy. A series of short films, some produced by local filmmakers, will also be shown prior to each main feature.

Space is limited with a capacity of approximately 200 vehicles. Pre-registration is required for each screening of the “Free Wednesday Movie Nights at the 2020 Queens Drive-In”, and opens two weeks prior to each showing via www.queensdrivein.com. Upon registration, guests will receive a confirmation, which must either be presented via printed copy or mobile device upon arrival.

The full schedule of “Free Wednesday Movie Nights at the 2020 Queens Drive-In” is as follows:

The “Free Wednesday Movie Nights at the 2020 Queens Drive-In” — featuring a 60-foot screen constructed in the NYSCI parking lot — will open to pre-registered attendees at 7:30PM, one hour before the film screenings begin at 8:30PM. Beginning on Wednesday, September 9, the lot will open to pre-registered guests at 7:00PM, with the film beginning at 8:00PM. Exact timing is subject to change, and the film screenings will be held rain or shine.

Food and beverages will be available for contactless purchase through featured vendors that participate in the seasonal Queens Night Market, held annually at the NYSCI parking lot in Flushing Meadows Corona Park but currently postponed due to the ongoing COVID-19 pandemic. Food and beverages can be purchased via contactless ordering during pre-show programming or via stadium-style vendors walking the premises before the main feature.

Providing $70,000 in financial support for the “Free Wednesday Movie Nights at the 2020 Queens Drive-In” is the non-profit Flushing Meadows Corona Park Improvement Fund, which is jointly overseen by Borough President Lee, Commissioner Silver and Comptroller Stringer.